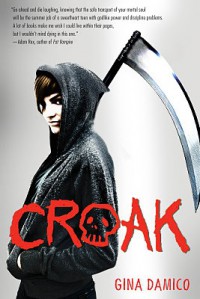 Grim Reapers. Next big Young Adult Paranormal craze? Though I never imagined myself saying this before, but I think I'd be open to that, if this book is any indication. It was nice to read something new that wasn't vampires, werewolves, angels, or aliens. Still, no book is perfect, and there were definitely some elements that I wasn't a huge fan of.
The humor was one of the main bragging points of this book, but to me, it wasn't quite worthy of all the praise. I felt like the funniest moments where when the author wasn't trying to be funny, and some of the jokes felt too forced. While there were parts that caused me to laugh out loud, I felt like for every good joke, there was also a joke (or two) that was just as bad as the other one was good. I suppose they were probably just as funny as the others, since other people seemed to like them plenty, but they just weren't my kind of humor.
Another aspect that was a sort of hit-and-miss were the characters. Sometimes, I genuinely liked the main characters. Other times, I found myself close to hating them. Lex was pretty off-and-on, and though I liked Driggs most of the time, even he managed to annoy me more than normal. Sometimes, the charachters seemed quite intelligent, while other times they were as dumb as a box of rocks. When I liked them, I really liked them, but when I didn't, I really didn't, and I would have preferred some more consistency at the very least.
Finally, while I'm normally enjoy puns and plays on words, I felt like they were a bit forced in this book. Everything in the town was given a name relating to death, along with some of the characters, and it honestly got old a bit fast for me. After a while, it just seemed immature and childish. I felt like they would have been a lot more efficient they had been used more sparingly.
However, despite it's flaws, I really did enjoy this book. It was creative, and so far I haven't read anything like it, though I predict that might not hold true in the future. I can see how many people can enjoy the humor that I didn't, and predict a surge of popularity for this book, and its subject matter, is inevitable.
Three Point Five out of Five Stars