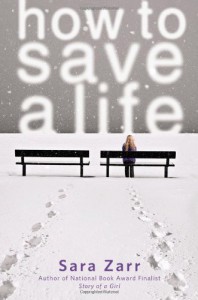 I wanted to like this book a lot more than I did. I saw it a few years ago in a bookstore and thought it looked really good. I added it to the list of books that I should read, and when I saw it in the library a few days ago, I picked it up and took it home. Now, a part of me wished that I had left it on the shelf. It wasn't that it was exceptionally bad, it just wasn't exceptionally good.
My biggest complaint is the characters. I disliked both the main characters quite a lot, actually. I found myself liking the two boys in the story far more than I liked either of the girls. I'm not the kind of person who dislikes a character just because they have flaws, I believe that it makes them more realistic, but these characters had flaws that I just couldn't overlook. I think the author meant for some of Mandy's quirks to be endearing, but I just found them creepy. I felt like at times, Jill was unrealistic. I didn't find either of the characters likable, and while I acknowledge that it isn't a requirement for the main characters to be likable, I believe that they were meant to be liked in this book, and the author failed to make me even tolerate them. Plus, while there was some character development, I felt like there wasn't enough from this kind of book.
I don't know where I stand as far as the plot is concerned. It took a little while for me to get into it, but after maybe fifty to seventy five pages, I did find the plot quite compelling. However, I don't really understand what the purpose of the book was, and I don't feel like the plot really went anywhere. I couldn't identify a real conflict, though I see what might be considered as the climax.
While this book wasn't terrible, it wasn't as good as I thought it would be. Maybe my high expectations made the actual book pale in comparison, but I didn't really find it that good. I wouldn't call it a waste of my time or anything, because I think something can be gained from reading anything, even if it's of poor quality, but it took me longer than normal to finish. It could just be that this book just didn't resonate with me. It's one of those books that I would suggest to my friends, but if they wanted to read it, I wouldn't stop them.
Two out of Five Stars